In stock (can be backordered)

Ever since Elena Cobb have discovered old copies of the 1920’s edition of the ABECEDARIAN series of books, they immediately became her favourite piano resource in lessons with beginner students of all ages. Twenty years later, she is delighted to present to you her own edition of the series. In this book, you will notice that the crotchet/quarter note is used most of the time with minim/half note and dotted minim/dotted half note being used only in the last bars in some duets.

The counting, which the pupil should do aloud, is indicated simply by the number of notes each bar (measure) contains. For example, if there are three notes in a bar, three must be counted; if there are four, then the pupil should count four. Exercises no. 1-5 are written on one note each; duets no. 8-10 are written within the compass of three notes; the duet no. 11 has a compass of only four notes and the remaining pieces have five notes each. No sharps, flats or rests are used in the pupil’s part, making the task of learning much easier at this stage.

Be the first to review “ABECEDARIAN Duets” Cancel reply

My Piano Trip To London Book 1 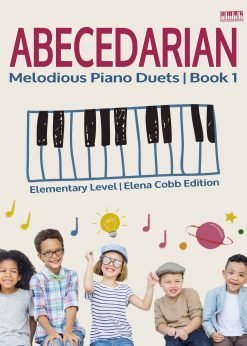